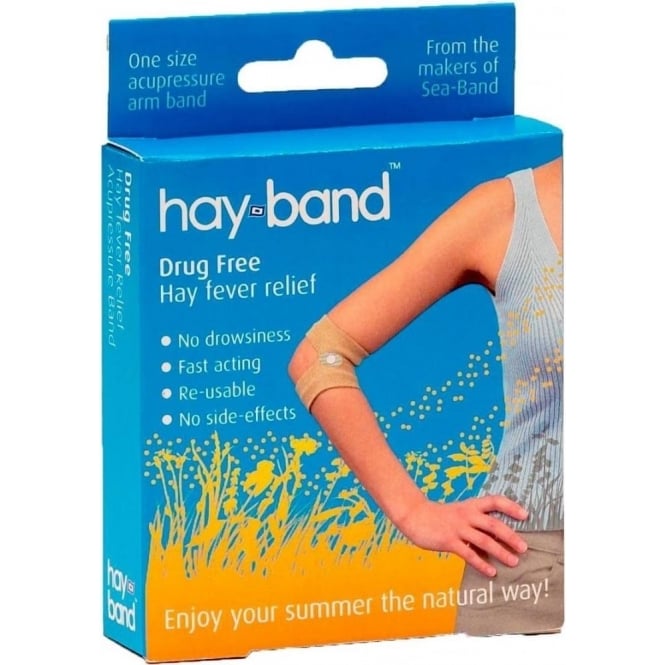 Code:
Loading...
Item in Stock Item out of Stock | Usually dispatched within 24 hours
By using acupressure, the Hay Band aims to embrace over four thousand years of traditional Chinese methods.
The HayBand can be used by both adults and children (over 3 years).
The Hay-Band does not cause drowsiness or have any other side-effects.
The Hay-Band is completely drug free.

Acupressure works in a similar way to acupuncture but does not involve the piercing of the skin in any way. Instead, the pressure points are stimulated from the outside - a technique which has been a part of Chinese medicine for 4,000 years.

Chinese traditional medicine believes that a person's health is governed by the free flow of energy (known as "chi") through the body. This energy flows through channels or meridians around the body and along these meridians are many pressure points.

It is believed that an illness or other condition is due to a blockage or disruption in the flow of energy along the meridians within the body. Stimulation of the pressure points helps release the blockage so allowing the energy to flow freely and return the body back to it's natural balance.

Each pressure point is believed to be related to specific parts of the body so a different point would be used to help treat a headache and other symptoms.

In the case of the "Hay-Band*", the acupressure point stimulated is the LI-11 also known as the "QuiChi" point.

*In accordance with the ASA and CAP it must be pointed out that the single point stimulation of the LI-11 point has not been clinically proven to relieve the symptoms of hay fever and allergic rhinitis.

At Chemist Connect our delivery service is quick, affordable and efficient.

Our standard Ireland delivery charge is FREE for all orders over €40.

For orders under €40 it is only €4.95 for Standard Ireland delivery

If you have any queries regarding your delivery our customer service team can be contacted to help you with any questions you may have.

We understand that there may be occasions when the items may not have been delivered correctly or that you no longer require the product.

If this is the case then you can return any unwanted items within 28 days for a refund or replacement. This applies as long as items are unused and are returned with the original undamaged packaging.

* For full details please navigate to our dedicated return page.